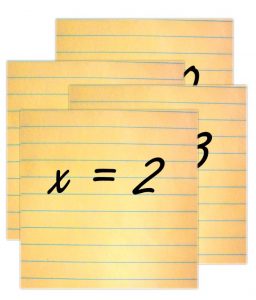 I’ve been playing around lately (pun intended) with something I’ll call, “barely a game.” It’s closely related to a similar concept which I’ll call, “A really dumb game that’s fun anyway.” More on that second idea in my next blog post.

Barely a game is an activity that seems game-like because it has some game-like components but that’s missing something essential to make it a true game. For example, it might have randomness or game tokens or play money or scoring (all great signifiers that a Game is Happening), but no clear winners and losers.

My latest foray into “barely a game” with my algebra students had two great game elements:
1. Randomness (through randomly dealt cards) and
2. Competing teams.

I put the expression

up on the board and asked my students what they thought it would simplify to.

They all pretty much agreed on 1, with some great reasoning as to why. (We started with “they cancel” and managed to get to the much more mathematically sophisticated “the same thing over the same thing is 1.”)

Then I showed my students some cards I had hastily created on half sheets of paper. 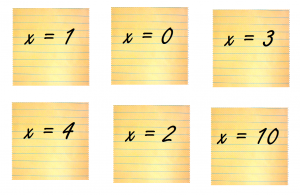 I asked them which values of x would be easiest to plug in, and we all agreed that 0 would be best, with 1 as a close second. I shuffled the cards and gave each team a card, wishing them luck in getting the “best” one. Each team had to evaluate the expression  for their value of x. We noticed that all the expressions came out to 1, as predicted by what we thought would simplify to.

Next, I told students to quickly trade their card with another team – maybe they would get an easier number this time!

Each group then evaluated the new expression

. Students were surprised that the expression simplified to 2 for every single group! We went over how to factor this expression to

, which, since it was 2 times our previous expression, made sense would simplify to 2.

One more shuffle and trading of cards! Now each group evaluated the expression

We discovered that each group got a different answer! This lead us to the conclusion that this expression would not simplify. Discussion then turned to whether you could cancel over addition, which in turn lead to my favorite meme: 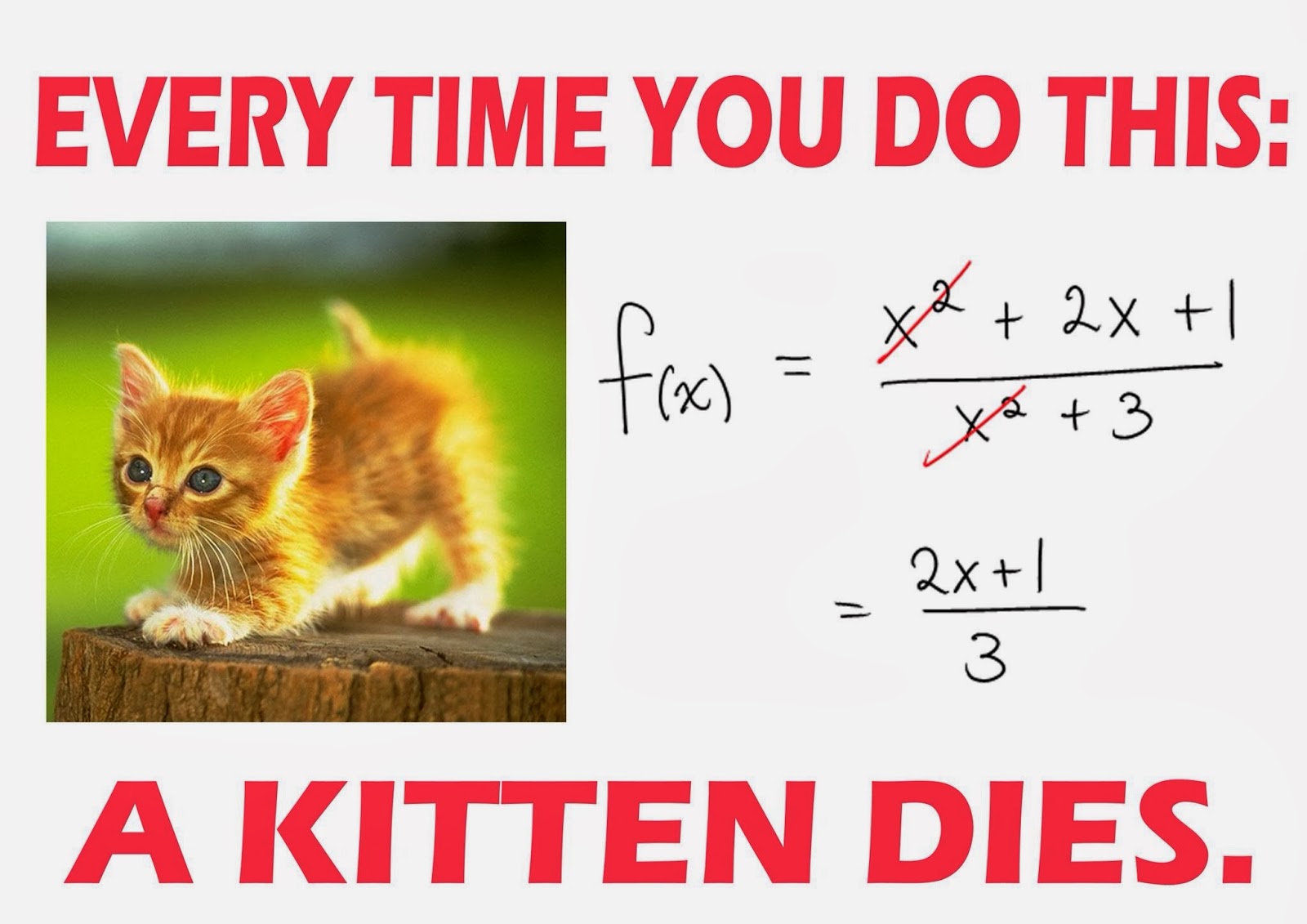 I have three cats, so I had to assure everyone I was not planning on sacrificing a kitten any time soon. But I do love this meme so much, and it made my student laugh.

So that was my “barely a game”! Why wasn’t it really a game? Because, although it was sort of pitched as a contest (which team will get the easiest number?), there was no actual competition, nor even any scoring.

Could it be changed into a “real” game? Probably, and with not much tweaking. But I have to say that I really liked it this way. It was fast, it was fun, I didn’t have to prep that much to play it, and I’m not really fond of the winner/loser aspect of games in an educational setting anyway.

In addition, it’s versatile — I could see modifying this for calculus or for arithmetic.

For calculus, we might try plugging various similar expressions into the definition of a derivative formula.

In arithmetic, we might try the following cards, to explore what happens when we multiply or divide by powers of 10: 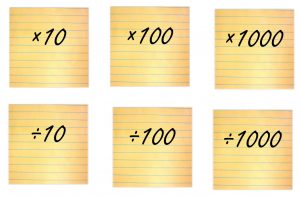 That concluded this blog post! Stay tuned for the next one, when I talk about how an awful game can be really fun.

Need help with the Commons? Visit our
help page Send us a message

Built with WordPress Protected by Akismet Powered by CUNY