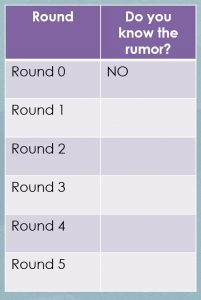 This game introduces students to the concept of exponential growth. It can be played as the spread of a rumor, or the spread of a virus, and works well in an algebra or modeling course, in a quantitative reasoning course, or a liberal arts mathematics class.

Students are instructed to stand up and mill around. In each round, they must look at one other person’s card. If that person’s card has a yes, the student who did not have a yes now has one, while everyone else writes no – without saying anything about which they have on their card. After enough rounds so that everyone has a yes (for a class of 35, this is usually about 6 rounds), students sit down and a chart is made of how many had a yes at each round. Connections are then made to doubling, and to powers of 2, which then leads to a discussion of exponential growth.

Note that the growth modeled here is actually logistic, since there is a limit to the number who will have the rumor or virus, but if the game is played only up to a certain number of rounds, it mimics plain exponential growth nicely – as does the spread of a rumor or virus in a large population. The game can later be played with different growth factors, such as introducing some amount of immunity (a person only gets the virus after being exposed twice, or three times) or increased virulence (each person shows two or three people their card, on each round).

The Spread of a Rumor can be seen as a simulation, rather than a game, although the distinction between a simulation and a game is often only a matter of semantics. However, for serious 18-year olds, it can be problematic to be seen “playing” – whereas older students and future teachers do not seem to mind as much.  I usually introduce this one without saying the word “game.”